An international sketch project competition to develop a high-quality, architecturally and functionally sound, sustainable vision for the future construction of the Riga Philharmonic has been announced. The site of the competition is in the part of Kronvalda Park that is the location of the Riga Congress Centre.  The area is a UNESCO World Heritage Site and is also in a part of a national urban heritage site. The Riga Philharmonic will be the permanent home of the Latvian National Symphony Orchestra, the Latvian Radio Choir, the Latvian Radio Big Band, and VSIA Latvijas Koncerti.

The Riga Philharmonic will become one of cultural and tourism hotspots in Latvia’s capital. The project will result the country’s most important music centre, a concert venue that will attract top Latvian and foreign musicians and a modern space for international events. It will make a significant contribution to Riga’s economic development and international visibility.

Importance of the event noted by national and local government officials, and industry professionals

Nauris Puntulis, Minister of Culture of the Republic of Latvia: ‘When I became minister in 2019, the concert hall was my top priority, and the implementation of the project has never been easy. After disagreements, we introduced a transparent site selection process, with a clear financing model reviewed and approved by the Cabinet, and so the project began move forward. We are working well with Riga City Council. It is only in this way that can we move forward together towards our next pressing objectives: the Museum of Contemporary Art and the expansion of the National Theatre. This is the focus that the Ministry of Culture and Riga City Council share.’

Riga City Council chairman Mārtiņš Staķis: ‘If Riga, as the largest municipality in Latvia, and the national government work together, we can achieve much more and implement much bigger public infrastructure projects. Latvia has been waiting for a concert hall for decades, and finally it can be built thanks to the collective work of Riga City Council, the Ministry of Culture, the architects, and the music world. I am convinced that the best approach is not to build completely from scratch, but to expand on what the city already has, an approach that is becoming increasingly popular around the world: it is more cost-effective, and it allows the city to breathe new life into the venues we already have. The new name of the concert hall—Riga Philharmonic—will generate worldwide visibility for Latvia’s capital, and will become one of Riga’s key landmarks!’

‘The Riga Philharmonic has great potential to become one of the most important locations in the city. This will be helped by the international prestige of our musical tradition and the philharmonic’s advantageous location. The philharmonic will make a significant positive contribution to our economy, and to the country and the city in general. I would like to thank the staff of Riga City Council and all our partners for preparing this competition making it possible for us to take the next step and deliver a high-quality project that meets all international requirements,’ Edvards Ratnieks, Riga City Council deputy chairman.

Juris Poga, head of the Latvian Association of Architects: ‘We’ve reached the next phase in the implementation of the Riga Philharmonic project. During the first phase, in 2021, we agreed on the location of the project, heavily involving the public in the process. The second phase was to define the objectives of the new concert hall, the idea of the premises, the regulations of the international architectural sketch project, so that we could expect to find the best of the best visions of the future concert hall as a result of the competition. There are still three phases left before we reach the goal: the competition, which starts today, the development of the construction design, which should start at the beginning of next year, and finally the construction, as the new Riga Philharmonic becomes reality.’

Indra Lūkina, head of the Latvian National Symphony Orchestra: ‘I am truly happy to see that after a long period of professional analyses, discussions, disputes and often opposing views, we have arrived at a common denominator that eluded us for decades. The single vision shared by the national and municipal governments and their commitment to work together give us hope that Riga will finally have a concert hall.  Let it rise!’

The goal of round 1 of the competition is to select 6 sketch projects whose authors, according to the jury, present the best functional and architectural solutions for the Riga Philharmonic within the context of the urban environment of the historical centre of Riga, so that during the second round of the competition, the submitted projects can be developed to a higher level of detail. In the first round, the jury will assess the urban, rebuilding, and functional concept. The participants will remain anonymous until the announcement of the results of the second round.

The terms of reference and the design schedule will be available in Latvian and English, in the electronic procurement system at www.eis.gov.lv/EIS/, and on the website of the competition https://rf.metukonkurss.lv.

Riga’s urgent need for an acoustic concert hall has been an issue since the late 1980’s. In 2020, in response to a request by the Ministry of Culture, the Latvian Association of Architects conducted a new study to determine a suitable location for the concert hall project, with an in-depth research in several stages. 36 potential sites were identified, of which the Riga Congress Centre was selected as the best. The results of a survey conducted by the SKDS market and public opinion research centre also  showed that two thirds of the Latvian population considered the Riga Congress Centre site to be the most suitable location for the concert hall. 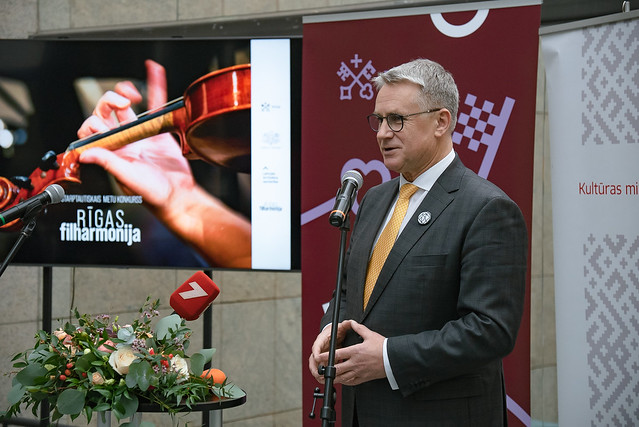