On Thursday, 22 September, Chairman of the Riga City Council Mārtiņš Staķis and President of the Latvian Football Federation (LFF) Vadims Ļašenko signed a letter of intent for the construction of a national-scale football stadium in the capital.

The President of the Union of European Football Associations (UEFA) Aleksander Čeferin, who is currently on a visit to our country, was also present during the signing of the document.

“Riga requires a good and new football stadium of a national-scale. And today, together with the management of the Football Federation, we signed a letter of intent to accomplish this intention. Together we have found several land parcels in the city where this project could be implemented. The specific location will be agreed upon by the members of the City Council. The construction of such a multifunctional stadium is also very important from the point of view of urban planning, we are at the starting point now,” said M. Staķis after signing the letter of intent.

The letter of intent provides for cooperation to facilitate the construction of football stadiums on a national scale that meet UEFA Category 4 requirements. Riga City Council and the LFF will work together to enable the Federation to build a stadium in the territory of the municipality that would host top-level football matches and other sporting events, including large-scale cultural events, thus increasing the potential for tourism, entertainment, and sports growth in the country and the capital. 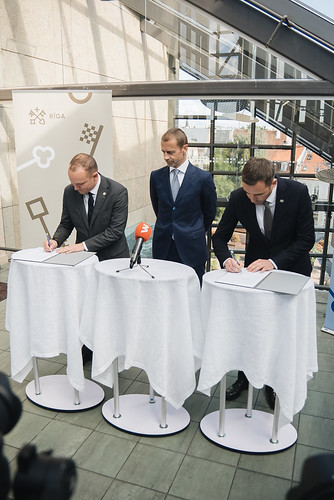