Pavement on 45 gravel streets improved in Riga this year This summer, work continued on improving gravel street pavement in several neighbourhoods of Riga using double surface treatment technology. This technology was used only for the second year in Riga, and the main benefit is dust reduction and improved road quality. Pavement improvements were performed in 45 streets and sections covering the total area of 61,000 square metres.

Gravel street pavement was improved in ten streets in Kurzeme District, 15 in Zemgale Suburb, five in Latgale District, two in Vidzeme Suburb and 13 in Northern District.

Vilnis Ķirsis, Riga City Council Vice-Chairman for Transport Infrastructure and Development, states: "Potholes, puddles and dust are the inconveniences often faced by residents of gravel streets. For the second year, we are making extensive use of double surface treatment technology, which has proven its worth in several other municipalities, to give gravel streets a smooth and hard surface free of mud, dust and puddles. This year, pavement improvements have been carried out at double volume compared to last year, and instead of the originally planned 36 streets and sections, improvements were made at 45 places. Thus, in two years, we have been able to put in order more than 60 streets across the city, and we will continue this programme in the coming years to put in order as many streets as possible in the neighbourhoods of Riga.”

Bituminous emulsion was used for the treatment of streets with gravel pavement, and the key benefit is dust reduction and improvement of road quality. The initial phase of the works consists of preparation of the street base and raising of the manholes at carriageway level, followed by laying of the bitumen emulsion.

Last year, in 2021, pavement improvement with double surface treatment took place for the first time in Riga. Then pavement was improved in 18 streets covering an area of 31,000 square metres. 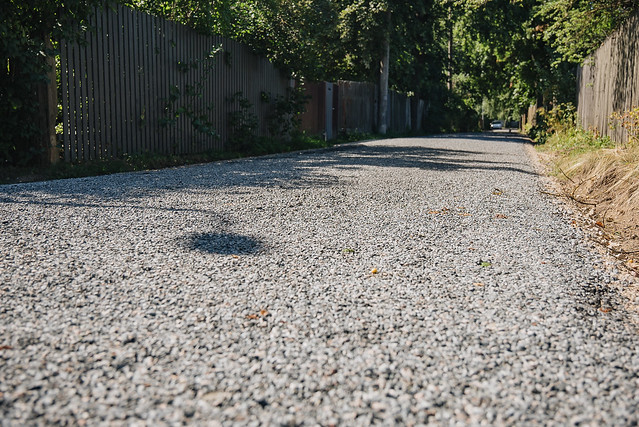